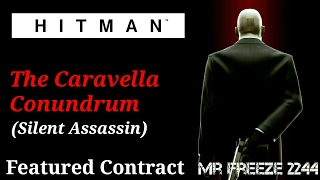 You know what's up, freeze army and welcome to the Caravela conundrum featured contract sets in Paris. Mr. freeze two four four: I probably pronounce that name wrong, but never mind. I want to bring along our coin for this one, your concealable baton, I'm gonna start in the AV Center, and we'll, bring along a silver baller and that's.

All you're gonna need for this future contract, so, first of all, once the level loads up grab that fire rope which remote and trigger it once you start running down this area over here that's. Gon na cause never cloth to walk in your direction and we're, actually going to grab him on the way back.

We need to take him out with a fire axe and, while disguises of chic, so once you come into the room, pull out, you can see the baton and throw it at the sheiks head immediately. Grab it pull out your pistol, shoots the bodyguard in the leg and then throw the baton at his head before he gets up quickly, put on the the sheiks disguise and go and grab that far racks that we ran past a little bit earlier and quickly catch Up to Novikov now you have to do that all pretty quickly for the Salters setup and footwork to work properly so make sure you do this pretty quickly so just before he entered the door aim aimed the axe and soon as he enters at the door.

For the throw the act of the back of his head and then drag his body into the the bathroom here, there gonna be a police officer on some occasions, not all occasions but someone, but he always happens back to you anyway.

So you don & # 39. T really need to worry about him. Once you've dumped his body in the crate. We need to go and get a kitchen knife, and then we need to throw it at dilemma. Gold, as his head wall disguises Helmut Kruger, it's, not not particularly hard, but it can't, be a little bit long, trying to get helmet crook.

His disguise that's. The only downside about this, but once you come into this little kitchen here, we need to grab a knife, but you are gonna get suspicious when you grab a knife, so you have to make wait, make sure every one of those back is to turn to You before you grab the knife itself now there is another knife here just behind this woman here just here so once we grab that we can put it away immediately and we'll, get away over there without getting suspicious all that'S suspicious at all now we have been spotted by the camera, so we will take those cameras out a little bit later on make sure you were if you want to try to get Silas a some reason for this particular feature contract.

Now we need to do. Is go and grab the helmet Krueger's disguise now he does come over here in the corner. He'll, make a phone call, as you should know. By now, and when we're gonna grab his disguise. We're gonna take out the bodyguard as well just to save some hassle of potentially getting caught.

You know taking him out, so we're gonna take him out first and then we'll grab Helmut Kruger, so there isn't gonna be a bodyguard coming down momentarily. I'll skip it to the point where Kruger is over in the corner and then I & # 39.

Ll can continue from there, so this bodyguard is gonna be walking toward where home at Kruger is going to be in the corner. We're, just gonna subdue him before Helmut Kruger, moves over to the right area and we're, going to subdue how the Kruger is well grab his disguise.

We don't need to grab his phone, but for some reason I did it anyway. I think it's, just a force of habit really because every time you go cruises guys, you always tend to pick up the phone, and I did something that you shouldn't.

Do really it's, not really necessary. I actually called Dalia, because I wanted to drag this body and dump in the crate just in front of us, but because I engaged in this conversation right here, which I do not advise by the way it will not.

Let me drag anybody or skip this conversation. So I'm forced to listen to this message. Unfortunately, now they'll, but regardless we just got to drag the body into the crate. We're. Just we would have saved a few seconds if we actually just got on with it and directed body in the the closet straight away, rather than picking up the phone, but once that's finished anyway, we're, just gonna drag His body dump it in the crate.

We already have the kitchen knife, so all we got to do now is head straight to where Dalia my goal. This is nice and easy. There's. This guys will get you everywhere in the palace. Apart from the Attic that is, you can run past all the checkpoints and there's, no fresh points or another, so you can run straight into her room at this point.

If you've, followed up to this point so far, dial and Margolis should be in her room right now with her assistant or whatever. You want to call him and he is gonna be in the room with the guard as well.

So once you just take a seat in the room, the guard should leave the room and dynamic collars and their assistants. It's, gonna be in the room. Still. What would after, they then need to do is create a distraction in the bathroom, because this conversation goes on for a long time.

I'm. Some reason you can't even bump into them already thought that all distract them with a clock radio in here. So what I found would be a reliable strategy is by throwing a coin into the bathroom Dalia Margolis herself always comes into the bathroom.

Is not a resistance, so I'm, not completely sure why that happens, but dialer mcCollister self comes into the bathroom. So it's, good news for us because it makes it nice and easy. So it's. Gon na throw a kitchen knife in the back of her head don't prune the closet, and then we're gonna head straight to the exit.

But we're gonna take the basement exit because we need to take out the cameras we need to do that. I mean if we started at the start of the mission and shot out the cameras there's, two cameras at the start and we wouldn't have enough time to catch up and over cough to throw the axe at the back Of his head, so that's, the reason why we had to just force to get spotted really, otherwise there will be a long strategy of getting Novikov alone and trying to take him out with the sheikhs disguise.

So this is the reason why I'll just book. Didn't bother about the cameras and that's. Why? I'm going to the basement. Now I'll, take them out and taking the basement extra exit, it doesn't really matter.

I mean it's, not a speedrun or anything. So I think we made pretty good time anyway, apart from making that phone call the unnecessary phone call, that is so. We're, going to pull out a pistol down here, shoot out the evidence right there.

There you go and then we take the basement exit. Then we'll, get the Sun assassin for the Caravela conundrum and yeah. I haven't done a feature contract for a while, so I need to get back in. Did you in some of these and we can move on to some other contractions double of that, so that's gonna do for this video, so thank you very much watching feel free to drop a like and subscribe here.

If you are new to the channel and I'll see you guys in the next video Cheers.