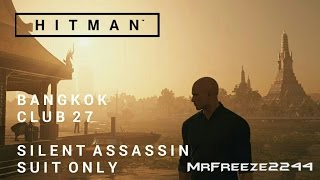 I'm, going to start the Riverside landing, which is the default location now. The reason why I'm redoing. This water is because some people were struggling with the previous video due to the fact that they've changed some of the rules and regards to the cameras.

They have a much more wider field of vision now, so this much more easier to get spotted by the cameras and some people have found it more difficult to get through one of the rooms. What I told you to go through, so this one is going to be a lot more easier, so we're, the poison, the same dish that we did in the previous level just in front of the two red bottle right there.

Now I'll, take care of one of the targets for a poison kill, so that will take care of itself. We don't need to worry about him anymore, so we need to make our way up the stairs and across the roof to get to where Jordan crosses penthouse.

We is, I'm, going to show you a way to get past a particular room a lot more easily. Also, I'm, going to show you all the different places where you should make the save points and stuff like that. So once you get to this door was going to pull out our pistol and shoot the camera that's above the door, pull out your coin and then throw it across just over the shoulders of these two gardeners.

They're, going to turn to their left and that's when you want to bypass them and run around them in the circle of this. Once you get through this area, I recommend making a save point right here. I'm, going to grab that pool ball, that's on the table then get on this where we are right now hold the wall and soon, as the guy in front of us sits down.

That is when we're, going to shoot the camera once you've shot. The camera makes your way around the edge of the table and stay in this location. The reason why we're doing. That is because this guy is going to go to the location where we was where we shot that pistol, and he would have heard up short, that's.

Why we shot the camera from that location right there. Now the going to background, as you can see, is just about to turn around and that's when this is a cue for us to actually into the room. So this guy was just sitting down just momentarily.

He's, going to make his way around to the ledge. He is going to lean over the railing and as soon as he does that ask when we're gonna rush into the room and go straight through with a pool ball in our hand as soon as he leans over and lots of a Cigarette we're, going to crouch, went through the room.

We won't, get spotted at all. If you time it perfectly like that and then smack him in the back of the head, like that with a pool ball and just drag his body towards this location here so, like I said soon, as you start, leaning over the railing and lining up a cigarette That's when you want to cry out run through that section, you should not get spotted by anybody.

To do what we did in the previous level, while the previous video should say, and we're just going to throw coin just on the floor just like there and they're. Just going to wait for these two gentlemen to come over to investigate, one of them is gonna, come one by one.

So we're just going to grab this guy slipped you around a corner. If you can't subdue around a corner, just like using this location, make sure you grab them as soon as he turned around so just subdue him and then were actually going to drag his body and don't come in the Closet ustus in the corner of this bathroom Jordan cross is currently upstairs.

So I've got plenty of time to do this. I'm. Just going to repeat the steps, just like we didn't previously throw the coin on the floor. Wait for the guide to come over toward the door. You could subdue around the corner again if the subduer option, isn't pop up for your wait for him to turn around and then subdue him just like I did with the previous guy and just like the other one.

We're, going to dump him in the creek the closet as well. Now, at this point, I'll recommend another save, and then we & # 39. Ve got a lot more time, quite a while now for a record across to warm all the way down stairs to get to the location when we need to go so for the benefit of the video.

I'm just going to skip this [ Music ]. So using your mini-map. You will see Jordan cross hadn't your way in this location. So once he's a near, you was going to pull out our pistol. Get behind this crate right here! He's, going to be going into the booth.

This is in front of us as soon as he turned into the room. We're, going to eliminate him using the pistol, and once we've done that we're just going to drag his body into the bathroom and talk him in the corner, just to get his body out of the Way at this point, this is where I recommend making another save, but for now it's, going to talk his body in the corners just like that.

We're, going to put the gun away and we're. Just going to crouch run through the section again leap over this revolt over this railing, I should say edge it on the edge and then climb down the pipe one floor.

So we're just going to retrace our steps, but the way we came once you through here got to deal with all the guys that's in this room, now use your instinct to look through the wall and you'll see everyone moving away as soon as everyone starts moving away and facing the other direction.

That's. When you want to make sure you crouch run through the whole room. The main people you need to take care of is the guy with the headphones, the guy that was always facing the TV and the guy on the railing.

Once you get out here, we've got a throw corn in that direction. Now, just to get short make sure the gardener is facing the right direction. For the Y's, he will go and face forward and it can potentially spot you that's, why we threw the coin to the right of him to make sure you always look to right, but once you've Gone past all this section here you completely home home and dry and head straight to the exit, and you'll, complete your silent assassin suit only of Bangkok.

So obviously that was a lot more easier than the previous video. I've done on this. Now we & # 39. Ve got more a lot more experience with Bangkok and things like that. It's, a lot more easy to pull off in regards to doing these strategies.

So hopefully this has helped you all out all the people that were struggling with the previous video that I put out for silent assassins to only walk through for this. For Bangkok - and in particular I hope you all get this song assassin only ranking at the end, so there's, just some assassin rating, so that's, going to do it for this video.

So thank you very much for watching now. It feel free to drop a like and subscribe if, with all that, offer and all that good stuff and I'll see you guys in the next video Cheers.