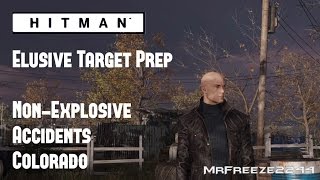 You know what's, our freeze army for this video. What we're gonna do is show you I'm, going to show you all the examples of all the non explosive accident kills that take place in Colorado. In preparation for Friday's, elusive target, and in this game there's going to be six classifications of Olympics accident kills and all them include the fall.

The falling object, accident kill, explosion, electrocution drowning and fire. The first example I'm, going to show you right here, is the fire accident kill and so, like? I said, we're gonna basically covering all the accident kills within Colorado.

That does not contain explosions. There is a lot of accident, kill opportunities within this particular mission. More than actually Falls. It was no doubt I probably missed a few of them, but I tried to cover as much as I possibly could in this one now is that the first one is going to be the fire action and kill.

This is a totally appropriate. You can use this for a you loose a target if he so happens to go near one of these big barrels. The second one is that again another fire accident killed you don't have to shoot the barrel.

You can actually just puncture it with the screwdriver if you wanted to and again once the enemies in the the puddle of fuel and to shoot it and that'll. Take care of the end of the fire accident kill the next one is a falling object, accident kill, which is just under this car here.

If you can just wrap the little chart over here, move this car, you can kill him this way with an accident kill. This is totally acceptable. Next off is an accident fall, and basically I want to show you a different way of doing this.

Usually, usually you can just kick them off a roof. It will result in the same thing. Let's. Just take this guy off first, so what we've done is knocked out, the guy that we wanted to kill. That accident kill.

Now, since a recent update, what you can actually do now is knock out your your enemy and just kick him off the rooftop that, and it will say, accident killed on truck on your screen. This is a created contract that's.

Why these ain't popping or but these are these ones, I assure you, are now accident kills. So, even if it's by you discovered, you can still get this on assassin rating. Next up is the falling object, accident kill, which is in Colorado, both the barn when we just drop the hay belt.

Just on my property's head so that's, a falling object, action and kill the next one is going to be another fire accident kill which is going to be a barrel just over here next to the slurry pit. So I'm, just gonna shoot that barrel get off a guy into position and shoot the puddle kill them, and that's far actually now.

Next, stop is another fire accident, and this time there's going to be a barrel just outside the area where you start off as an explosive specialist. So we're, going to get our target vision again and again shoot the fuel to puddle and that will ignite the fire.

The next stop is going to be an electrocution. This is the first one that's in Colorado, and we're gonna do is first of all, just shoot the plug or you can expose it with a screwdriver. If you please, if you want to, I'm, going to turn on the power and then we're going to overflow the sink and that's.

Gon na create puddle on the floor and that's. Gon na kill our there's, no execution kill next up is again. The falling accident kill two examples of those, so their accident falls. Next up is the drowning accident kill.

So we're, first of always going to poison this water bottle here, which is the point man's water bottle. So he's just taking a drink event. It's. Gon na get a bit sick. He's, gonna go to the bathroom and that's.

What I'm gonna drown just would also work if you stabbed in with the emetic syringe as well. So once the a drowning animation has completed. You'll, get the accident, kill or popping on your screen. The next stop is that accident fall again here this one we've got a falling object, which is a chandelier this time dropping on Penelope grave head.

Next, one is fire again this time. If you just shoot that tap on the oil drum there, we're. Just gonna get our plant go into position, shoot the fuel puddle and there we go and there's. Another fire accident kill now the last one is going to be the RAM the battering ram just right there and I couldn't, find any more accident kills apart from people, pushing people out the windows and stuff like that.

But I want to test one last thing before we end this video and that & # 39. S is first of all, what's gonna push this guy inside here that will show up as an accident killed that's. How a cornea screen this last guy's, just gonna go on the edge of I'm, assuming this is where the illicit I it's gonna be around this area anyway.

So, first, what we just going to knock him out just to just to prove that this works. I'm gonna take his disguise as well, so he's like half naked, just to show it just to show you there still doesn't matter.

Even if you take his clothes and then we gonna dump his body and that will kill him and that will be still be an accident kill as you'll, see in the top right corner your screen. So, even if his body is found - and he's like half naked, even though it's, clearly obvious that he's been murdered, it still counts as an accident kill.

Even if you take us to score, though, even if you shoot him in the head after he's dead and went like that, but it won't affect your son, assassin right or another, so you can still exit the level and Still get the silent assassin right and, despite his body being found it's bought in being half naked.

I just what the fact that you knocked him out before shrug in assuring him off, so I recommend this technique for the elusive target tomorrow. So if you go ahead and show them off straight away, there's, always that chance of you being spotted doing action so would rebecca recommend just knocking them out first, before shoving them off that's, going to do it.

For this video, so thank you very much for watching and feel free to subscribe and like and all that good stuff and i'll, see you guys in the next video Cheers.